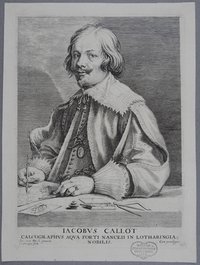 "Jacques Callot (French: [ʒak kalo]; c. 1592 – 1635) was a baroque printmaker and draftsman from the Duchy of Lorraine (an independent state on the north-eastern border of France, southwestern border of Germany and overlapping the southern Netherlands). He is an important person in the development of the old master print. He made more than 1,400 etchings that chronicled the life of his period, featuring soldiers, clowns, drunkards, Gypsies, beggars, as well as court life. He also etched many religious and military images, and many prints featured extensive landscapes in their background." - (en.wikipedia.org 29.01.2020)