"Prince Frederick Charles Alexander of Prussia (German: Friedrich Karl Alexander; 29 June 1801 – 21 January 1883) was a younger son of Frederick William III of Prussia. He served as a Prussian general for much of his adult life and became the first Herrenmeister (Grand Master) of the Order of Saint John after its restoration as a chivalric order. Nevertheless, he is perhaps remembered more often for his patronage of art and for his sizable collections of art and armor." - (en.wikipedia.org 08.11.2019) 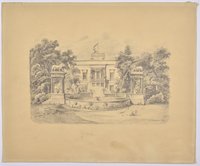