"August Hermann Niemeyer (1 September 1754 in Halle (Saale) – 7 July 1828 in Magdeburg) was a German Protestant theologian, teacher, a librettist, a poet, a travel writer, a Protestant church song poet and a Prussian political educator. He was professor of theology in 1780, then vice-chancellor of the University of Halle-Wittenberg.

He studied at the University of Halle, where his teachers included Johann August Nösselt (1734-1807), Johann Jakob Griesbach (1745-1812) and Johann Salomo Semler (1725-1791). In 1775 he published a highly regarded work, titled Charakteristik der Bibel (Characteristics of the Bible). In 1778 he met with Johann von Goethe, with whom he established a friendship that lasted until Niemeyer´s death in 1828. Around 1802, Niemeyer translated Terence’s Andria for Goethe under the title Die Fremde aus Andros. Soon afterwards the play was performed by the Weimar theatre." - (en.wikipedia.org 30.01.2020) 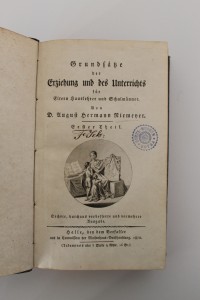